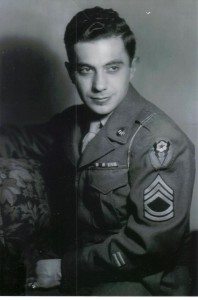 Troy, N.Y.’s George Ovigian, 24, and Richmond, Va.’s Servart Bektimerian, 21, were wed in 1946 after a courtship that had blossomed during World War II. How they were brought together with the backdrop of that war is a love story to remember and to honor.

George’s father left Keghi in 1905. His face bore a scar from a Turkish bullet during the Hamidian Massacres of the 1890’s. His mother was from Istanbul, attended high school there, and spoke four languages.

George was their only child and he belonged to the Troy AYF chapter there. He also served on the AYF’s Central Executive as treasurer for two years. His story begins here as a young adult attending Sienna College, when he and George Avakian were headed for double dates. On the way, they heard news of the Dec. 7, 1941 bombing of Pearl Harbor by the Japanese. Realizing the significance of this tragedy, they canceled their dates and headed back home.

Sienna College established reserve programs to train patriotic students for future service in the military. George was one of many. He soon headed to Albany to the recruitment office of the U.S. Air Force, but was rejected because he was missing the molar teeth necessary to become a pilot. (Molars were required because without them, a pilot’s jaw could be broken from any force while holding the oxygen mask in his mouth.)

It was an angry George who next headed to the army recruiter to ask for immediate enlistment, and was signed up as a private in his college reserve program. He took certain courses outside his accounting program, including physical training. The regimen also included physics and trigonometry.

In May 1943, his army reserve group was ordered to report to Camp Upton, N.Y., for active duty. Army life began in quarters made up of tents with cots for 6 people heated only by a half 55-gallon drum with a stove pipe for heat. Army life began before dawn with the issuing of army fatigues, etc. Civilian clothes were sent home and George exclaimed, “We’re in the army now!”

His assignments included cleaning latrines, garbage detail, and the dirty (and hot) job of cleaning up the troop train kitchen firebrick platform, followed by doing permanent KP as a meat cutter.

Upon completion of basic training, George was accepted into the Office of Strategic Services (OSS), ending up at Fort Mead, Md., with his anti-aircraft battery. On his first week-end pass, he decided to go to Richmond; he knew there was an AYF chapter there and hoped to contact someone who belonged to the local chapter. Little did the young serviceman know that the decision would alter his life forever. Love was soon to bloom for him.

The resourceful George started a telephone book search for names ending in “ian.” He hit pay dirt and called to explain that he was looking for an AYF member. They rudely said, “No! We don’t believe in the AYF!” And hung up on him. The second attempt met with warmth and success. He was invited to the home of Christine Moughamian, the secretary of the Richmond AYF Chapter who extended an invitation to George to lunch with her widowed father, three sisters, and two brothers.

While at their home, the phone rang and someone asked for George by name. Who could possibly know of his whereabouts?

The caller was Aris Ohanessian from Niagara Falls, N.Y., then a Marine who also connected to the situation looking for an “ian.” He too was invited to the Moughamian home. Later in civilian life, Aris became a captain of the Niagara police force.

Aris remembered George from a regional AYF conference he had conducted in Syracuse for the Central Executive.

Soon two Armenian girls arrived at the Moughamian home. The Moughamian girls had dates so Aris suggested he and George take the two new arrivals out for ice cream. Aris was tall, so he took Helen Kainakian, and George took Servart Bektimerian. Goodbyes were then said to the two newly met girls. The following week, Aris phoned George to meet again in Richmond. At the Moughamian home, Aris got down on his knee to formally ask Helen’s father to marry his daughter. He said, “Yes” to the young, blonde, handsome Marine and the wedding took place the following weekend, with George and Servart serving as best man and maid of honor. While standing at the altar in front of the priest, George said, “I heard some women saying Servart and I would make a nice couple too.” So it did become reality.

Christine Moughamian’s father was a recipient of the Crosse de Guerre from the French government during World War I for bravery in the French Foreign Legion. He had a damaged eye and could not get a driver’s license. The elderly gentleman had a son in the Armored Division soon to be shipped overseas, and he had a car that would be available to both Aris and George to use whenever they wished.

Once, when George was writing a letter in Armenian to his parents in Troy, he was caught and chastised for doing so when he had army duties to perform; he came under suspicion but proved himself innocent of espionage.

Because George proved his ability to speak Armenian to the army of, he was given orders to report to the City College of New York; he was being recommended to enroll in the Army Specialized Training Program (ASTP) to learn a foreign language.

George then received orders to go to Harvard in Cambridge, Mass., where he would attend classes in a foreign language. Music was used to determine his ability to distinguish differences in tone, vital to the learning of Chinese. He passed and would study the Chinese language. Completion of the intense six-month course would be required to sign an agreement to remain in Asia for three years after the war ended. He utilized various devious ways to avoid the commitment, but still was considered a graduate of the course. (Note: George Ovigian’s Chinese name is “Odjure,” meaning “one with far off ambition.”)

Now promoted to sergeant, he continued corresponding with Servart frequently and visited her family in Richmond. During his two-week furlough, prior to being shipped overseas, George and Servart agreed to meet in Washington, D.C. During his five-hour layover before boarding the train to visit family in Troy and before heading overseas, the young couple talked and went sightseeing. “I knew the love bug had bitten us and I proposed to Servart. She readily accepted and I gave her my high school ring in lieu of an engagement ring.”

His parents were overjoyed his son had met a beautiful Armenian girl to marry. George purchased an engagement ring and, as he was now overseas, his parents went to Richmond to present it to Servart and to get acquainted with their khnamees.