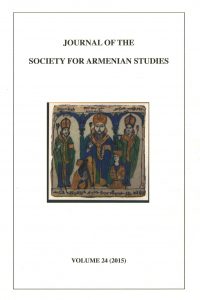 The volume begins with an essay by Cristelle Baskins that analyzes the representation of the Armenian merchant Khoja Sefer in the Quirinal Palace in Rome. Based upon a wide array of archival documents, Baskins provides a vivid depiction of Khoja Sefer’s travels to Italy as well as of the variety of identities he could embody.

In his article, Dickran Kouymjian investigates the book illuminations of the somewhat overlooked book artist, Grigor Marzvanec‘i. Working in the first half of the 18th century, Marzvanec‘i produced a number of large illuminated works that continued to be used and copied after the artist’s death.

Khatchig Mouradian’s examination of the Meskeneh concentration camp presents the camp as a case study of how prisoners collaborated with, appeased, manipulated, or resisted the system in order to survive. In doing so, Mouradian explores the dynamics of camp life and restores agency to the deportees who inhabited them.

In the first part of his two-part study of the last three catholicoi of the Armenian Apostolic Church, Levon Petrosyan examines the policies of Vazgen I and Garegin I and how these two catholicoi faced the challenges of the end of Soviet rule and of the early years of the Republic of Armenia.

In addition to these articles, volume 24 contains four communications on a wide range of topics. The first, by Albert Stepanyan, is a reexamination of the famous passage in Plutarch’s Life of Crassus that describes the defeat of the Roman general at Carrhae. The second, by Smbat Hovannisyan, is a reflection on how Braudel’s theory of civilizations can be applied to Armenian early modern history. In his communication, Stefan Ihrig emphasizes the utility of German sources as evidence for the perpetration of the Armenian Genocide. In their study, Russell Kashian and David Luhrssen use the Armenian settlement in South Milwaukee as a case study to examine patterns of ethnic clustering and dispersion.

Volume 24 also contains a review essay by Kouymjian on the recently published catalogue of the Alex and Marie Manoogian Museum in Detroit and three books reviews.

The Journal of the Society for Armenian Studies is a peer-reviewed journal and is published annually by the SAS. Copies of the latest volume, and back issues, are available by contacting the SAS secretariat by calling (559) 278-2669 or by e-mailing barlowd@csufresno.edu. Copies may also be ordered online at societyforarmenianstudies.com.