While I had heard about the Centaur Hippotherapy Center in Armenia about two years ago, I only visited the location late last year, after a volunteer invited me to join him the next time he went. I knew that hippotherapy focused on the use of therapy with the aid of horses, and was very surprised that it somehow existed in Armenia, where animals can have bad reputations. I was excited to see it for myself. When I learned that the center also had a dog shelter, it was definitely a “kill two birds with one stone” kind of feeling.

I arrived in Ushi after about a 35-minute bus ride from Yerevan, already noting the beauty of the area—even during the winter. Soon enough, two large dogs approached us, one lying down for belly rubs and the other seemed intent on leading us up a set of steps. It was quite the welcome. 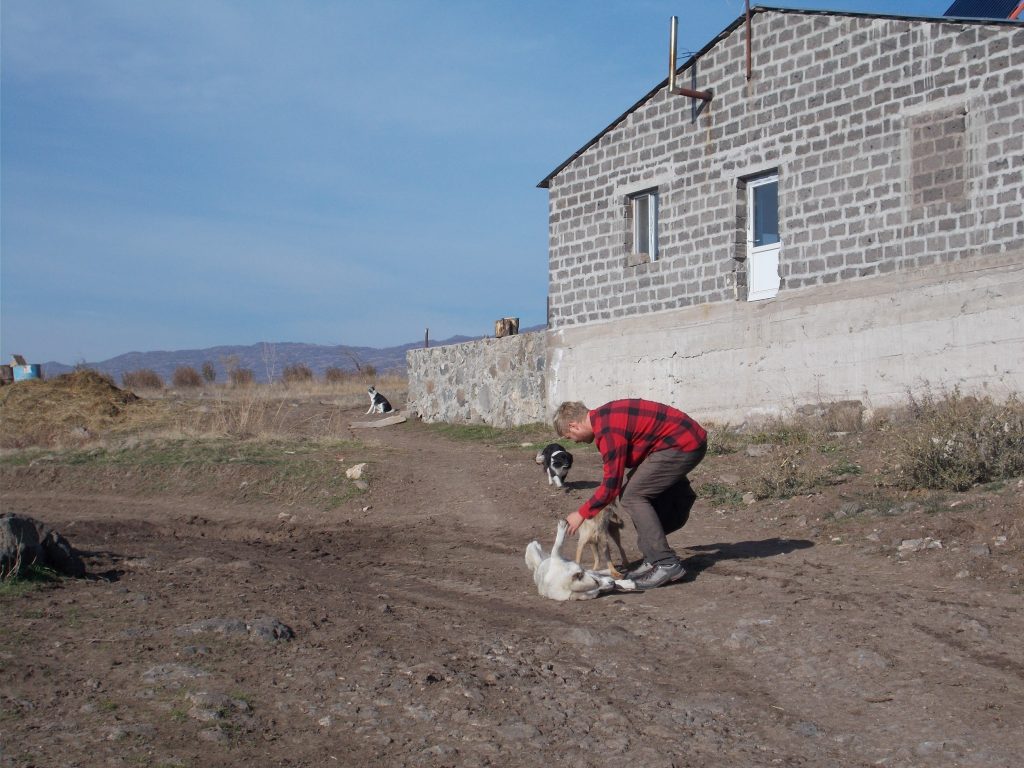 We went inside the home and were greeted by Anna, a hippotherapy practitioner and co-owner of Centaur, and Ty, an American traveler who took a break from his plans in order to volunteer there. Anna immediately apologized for not having any sweets for the obligatory coffee, and told me that once she had hers, she could answer my many questions. Inside the house (Photo: Lena Tachjian)

Anna told me about how Centaur came to be, and that a guest would be coming that very day so I could watch the process myself. Hasmik, the co-founder of the space, had been trained at a horse-riding center in Yerevan, and once she heard about the practice of hippotherapy, she made the decision to study it in Georgia, and brought her knowledge back to Armenia. She found Ushi to be calm and peaceful—the perfect conditions for hippotherapy. She found a space with a stable and two horses about eight years ago, with the landlord renting it out to her with the idea that she would take care of the horses.  Anna joined a few years ago after she returned to Armenia from her Masters program in Portugal, and decided to remain at the center, which changed locations about two years ago.

I tagged along as Anna began her busy day of cleaning out the stalls, brushing the horses, and feeding the animals. She told me that volunteers come and go, sometimes staying for a couple of nights in the trailers, and that there used to be a larger team with horse trainers. Currently, it was mainly Anna and Hasmik who were consistently at the center and managed the day-to-day activities. With the move, the center now has 6 horses, 42 dogs, 2 cats, a turtle, and a goat that has recently moved to a more goat-friendly location.

Centaur has about 50 visitors a week, varying from children to adults during the active months from spring until fall. The center offers different packages—from hippotherapy to horseback riding, to overnight stays. People come from all over Armenia, and it is used as a form of therapy for everything from cerebral palsy, ADD, autism, Down syndrome, spinal injuries, to pregnancy/fertility issues, and more.

The center is the first—and only—certified hippotherapy center in Armenia. Anna warned me of the dangerous trend she has noticed, where organizations that have horses claim to offer the service of hippotherapy, without the proper training or certification. She rhetorically asked, “How can people be so irresponsible—especially when dealing with children?”

While Anna was cleaning out the stalls of the horses and letting me feed them, she told me the story and personality traits of each one, making me understand the deep bond they had with the animals—many of which were saved from slaughter. My favorite was Febus, the “Egyptian one,” with the very standard Armenian male haircut with bangs; Febus definitely knew how beautiful he was. Febus waiting to be brushed and admired (Photo: Lena Tachjian)

In the stalls, Anna opened up, and told me that remaining at this center was also a personal decision for her. She said that even though she joined Centaur because she had always loved animals, she realized something along the way: “When I first came to Centaur, I was assisting and training, before helping Hasmik with therapy. I used to have a lot of trouble with stuttering, making eye contact, communication and socialization in general, which is why I liked being around animals. Without intending to, I ended up getting therapy through my work with the animals, too.” Hasmik added that she felt that the center was able to take Anna out of her “inner world” and joked about how she sometimes misses the days of Anna talking a little less. Hasmik said the biggest expenses are the horse and dog food, veterinary bills, and renovating the space. They are hoping to be able to fence in the riding arena so the horses will be able to get much-needed time outdoors during the day. As Anna told me about the large veterinary bills, she began to smile and said, “I learned to laugh at everything, even when I should actually be crying.”

In the future, Hasmik and Anna want to turn Centaur into a complete animal-assisted therapy center. Hasmik has even studied training dogs for therapy, but said: “While it is common in other countries, Armenia still sees dogs negatively, so it will not work yet.” She mentioned that eventually she would want to implement a program to take dogs to kindergartens for therapy. She added, “We are dreaming of having rehabilitation camps where people could come, stay for a few days, forget their offices, computers and TVs, live in harmony with nature, enjoy organic food, get involved in the care of the animals, horseback ride, play with dogs, and more.”

Hasmik and Anna then prepared for their guest, Marine, a visually impaired woman who opted for a hippotherapy package for exercise therapy and massage that would also encourage coordination, synchronization, and muscle movement. Marine arrived with a TV crew who wanted to film the entire experience. I watched how Hasmik and Anna carefully and attentively assisted her for her rounds around the large horse-riding arena, while I petted dogs sitting in the outdoor area created with the help of volunteers. At the end of the day, I couldn’t help but note that the entire center was being run by two incredible multi-tasking women, who defied every possible traditional stereotype of being a woman in Armenia. When we sat to enjoy a delicious vegetarian meal prepared by Hasmik, they began talking about their plans to get Ty the American married to a nice local girl.