Note: One of the images in this article may be too graphic.

STEPANAKERT, NKR (A.W.)—Heavy fighting continued today along the Nagorno-Karabagh Repubilc (NKR/Artsakh) Line of Contact (LoC), with reports surfacing of Azerbaijani brutality against unarmed civilians. Despite an earlier statement today by the Azerbaijani Ministry of Defense announcing an end to the armed hostilities, the assault against Armenian positions and civilian areas continued. Meanwhile, the NKR Defense Ministry stated that it was ready to discuss a ceasefire “in the context of a return to the prior positions.”

The Azerbaijani Army has been shelling Armenian civilian settlements, particularly the town of Martakert, using BM-21 Grad multiple launch rocket systems, as well as 152 MM artillery, according to the NKR Defense Ministry.

The NKR Defense Ministry has not released a statement on the number of casualties. Some civilians, however, have reportedly been transported to the Stepanakert hospital. Hetq.am published the disturbing news of an elderly couple—Valera Khalapyan and his wife, Razmela—found shot in their homes with their ears cut off. Another resident, Marousya Khalapyan, born in 1924, was also killed.

In another communique, the NKR Defense Ministry said that the situation “remains tense,” with “rather fierce battles underway along the northeast and southeast directions of the frontline.”

The video below by Azatutyun.am, RFE/RL’s Armenian service, shows footage of the attack on Martakert.

According to the NKR Defense Ministry, today’s fighting has led to a number of Azerbaijani casualties and military equipment losses, particularly near Talish. Enumerating Azerbaijani losses, the Defense Ministry held that “Overall, the Azerbaijani army lost 14 tanks and 5 other units of other armor yesterday and today, including an IFV [Infantry Fighting Vehicle]. The Nagorno-Karabagh Army lost one tank.” 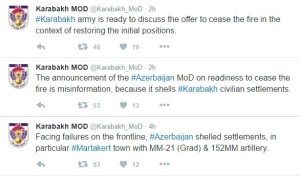 Tweets by the NKR Ministry of Defense

Early in the day, the NKR Defense Army undertook counter measuresand was able to regain a “tactically important stronghold” near Talish, which had earlier been overtaken by the Azerbaijani Army. During that operation, two NKR soldiers were wounded, according to the Defense Ministry. Starting at 6 a.m., there was also fighting on the southern part of the frontline, where Azerbaijani forces continued to use artillery and rocket attacks against the Armenian side. The NKR Defense Ministry noted that its army had carried out “successful operations” on the southern frontline.

In its latest communique, the NKR Defense Ministry held that Baku is covering up the real number of its casualties. “According to official Baku, 21 is equal to 12. It is clear that in order to cover up its losses, the Azerbaijani Defense Ministry is using a simple solution by changing the order of the numbers, presenting its losses from a single battle as 12 instead of 21,” read the statement, which referred to the fighting near the village of Seysulan. The NRK Defense Ministry linked to aerial footage of the area, marking what it said were the bodies of Azeri fighters.

Meanwhile, various news outlets have reported on the scores of volunteers from Karabagh and Armenia heading to enlist for service. NKR Prime Minister Arayik Harutyunyan met with hundreds of volunteers in Stepanakert’s Cultural and Youth Center on the evening of April 2. “I am happy that in such a short time, this many people have signed up as volunteers in this sacred mission,” he said. “If it is necessary, we will all go to protect the borders of our homeland. At this phase, I urge you to avoid succumbing to panic, and to keep the military spirit of the public high,” Harutyunyan was quoted as saying on the NKR government’s official Facebook page. On April 2, the spokesperson for U.N. Secretary-General Ban Ki-moon issued a statement expressing “concern” over the use of heavy weapons and the large number of casualties reported, including civilians. “The Secretary-General urges all relevant parties to put an immediate end to the fighting, fully respect the ceasefire agreement, and take urgent steps to de-escalate the situation,” read the statement. “The Secretary-General reiterates his full support for the efforts of the OSCE Minsk Group and all parties working to resolve this dangerous situation and pursue a peaceful negotiated settlement of the Nagorno-Karabagh conflict.” Press Secretary of the Collective Security Treaty Organization (CSTO) Vladimir Zaynetdinov said on April 2 that Azerbaijan’s actions were escalating the situation, and that there can be no military solution to the conflict. “Everything must be decided through negotiations. The Azerbaijani side’s actions in this case are leading to the escalation of the situation and the conflict,” he was quoted as saying by Russia’s Interfax news agency.

On April 2, Iran’s Ministry of Foreign Affairs called on both sides to cease the fighting, in a statement made by ministry spokesperson Hossein Jaberi Ansari. “Whereas the region is witnessing destructive acts from extremist groups and needs tranquility and stability, hearing of escalation of clashes in the Karabagh region between Azerbaijan and Armenia is [a] source of deep concern for the Islamic Republic of Iran,” Ansari was quoted as saying. “We urge Azerbaijan and Armenia to cease clashes promptly and use all their might to restore tranquility and peaceful settlement of differences within the peace groups and under the United Nations.”

Among other heads of states, French President Francois Hollande also called on the sides to adhere to the ceasefire agreement, stressing that negotiations are the only means to achieving peace.

On April 2, First Deputy Minister of Defense of the Republic of Armenia Davit Tonoyan received the French, German, and Italian ambassadors to Armenia, as well as a European Union delegation to discuss the situation on the NKR Line of Contact. According to the official website of the Azerbaijani president, both Turkish President Recep Tayyip Erdogan and Prime Minister Ahmet Davutoglu phoned Aliyev to express their support, as well as extend condolences for the Azerbaijani casualties. “The Turkish president expressed his support and solidarity over the events on the Line of Contact of the Armenian and Azerbaijani troops. President Recep Tayyip Erdogan said the Turkish people had always stood by the people of Azerbaijan, and extended condolences over the killing of Azerbaijani servicemen as a result of Armenian provocation,” read the press release.

Meanwhile, Parliamentary Assembly of the Council of Europe (PACE) President Pedro Agramunt said, “I am extremely worried at the reports of violence in Nagorno-Karabagh and deeply saddened at the loss of life yesterday. I call on both sides to honor the ceasefire and swiftly resume negotiations towards a peaceful resolution of the Nagorno-Karabagh conflict.” Agramunt also called for “the withdrawal of all Armenian armed troops from occupied Azerbaijani territories in compliance with the U.N. Security Council resolutions.”

Azerbaijan launched a full-blown attack on multiple positions of the Nagorno-Karabagh contact line overnight on April 1-2. The Azerbaijani Army employed tanks, military helicopters, drones, and various caliber weapons in an assault targeting the LoC on the southern, southeastern, and northeastern fronts. The NKR Defense Army retaliated, and, according to the NKR Defense Ministry Twitter page, brought down two helicopters and two drones, and destroyed three tanks. There were multiple casualties on both sides. Civilians were also targeted. According to reports, 12-year-old Vaghinag Grigoryan was killed in the Marduni region, and 2 other children were wounded, from a Grad BM-21 multiple rocket launcher attack.

During an emergency meeting of Armenia’s National Security Council held on the evening of April 2, Armenia’s President Serge Sarkisian announced that the Armenian side had suffered 18 casualties, with 35 people were injured. Azerbaijan’s losses—including to its air force, personnel, and armored vehicles—were “significant,” he added, according to PanArmenian. Azerbaijan reported 12 combatant casualties, and claimed to have killed 100 Armenian servicemen. The NKR Defense Ministry said on April 2 that the Azerbaijani side had sustained 200 losses. The April 1-2 attack came after the conclusion of the 4th Nuclear Security Summit in Washington, D.C.; participants to the summit included Armenian President Serge Sarkisian and Azerbaijani President Ilham Aliyev.

On the sidelines of the Nuclear Summit, Aliyev met with U.S. Vice President Joe Biden. According to the Azerbaijani president’s official website, “[Biden] said the USA resolutely supported Azerbaijan’s territorial integrity and sovereignty, adding that this was of great importance for the United States.”