Raffi Rachdouni served as the emcee for the evening and asked Der Hayr Kapriel Nazarian of Sts. Vartanantz Armenian Church to give the blessing. This was followed by three members of the Armenian Youth Federation (AYF) and Homenetmen, Cranston residents Taleen Donoyan, Anna-MarieDanayan, and Alysha Phillips, singing the American and Armenian national anthems. 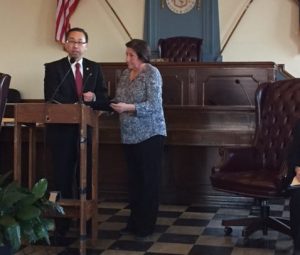 Longtime supporter and former elected official Aram Garabedian then spoke about the importance of keeping this flame burning as he directed his message to the Homenetmen scouts.

ANC-RI Chairperson Ani Haroian spoke of the recent struggles in Artsakh (Nagorno-Karabagh),  the bravery displayed by the Armenian fighters, and how the youth in Rhode Island have taken their place in the struggle for justice as active members of the ANC-RI. Taleen Donoyan of Cranston, who represented the youth and is an active member of the Providence AYF and Homenetmen chapters, gave a moving speech about the determination of her generation in continuing to struggle for what rightfully belongs to the Armenians in their ancestral lands, including Artsakh. Taleen Donoyan, member of AYF and Homenetmen, speaking on behalf of Cranston youth Archpriest Gomidas Baghsarian of Sts. Vartanantz Church offered the closing prayer. The crowd then went outside for the raising of the Armenian flag by the honorees, with the Homenetmen Scouts serving as escorts while singing “Mer Hairenik.”